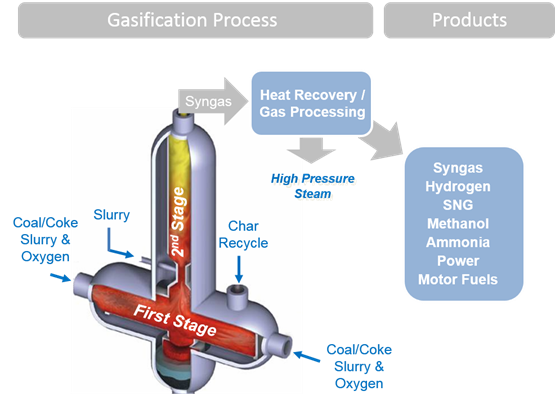 Lummus Technology's E-Gas Plus® technology is designed to produce valuable syngas and steam from petroleum coke or coal and residues coming from refinery processes. The E-Gas Plus technology uses our E-Gas™ technology as the basis while adding residue injection into the first stage and co-gasifying the coke or coal slurry. The resulting syngas is processed further, heat energy in the syngas is recovered as high-pressure steam, then sulfur and other impurities are removed. The resultant clean, sweet syngas can be used as fuel gas for power generation, or further processed to generate hydrogen, synthetic natural gas, methanol, liquid motor fuels or many other chemicals.

Hydrogen for a refinery can be produced by shifting the carbon monoxide in the syngas with steam (water) to hydrogen and then using Lummus Technology's pressure swing adsorption (PSA) technology to produce pure H2. The sulfur can be recovered from the syngas as elemental or sulfuric acid using Lummus Technology's sulfur recovery process. For example, residue such as pitch from a hydrocracker can be co-gasified with petcoke or imported coal.

E-Gas Plus technology enables the refinery to make use of a challenging stream to produce additional hydrogen and steam needed by the refinery.